Here is the route we drove during our trip
Hier is de route die we gereden hebben  tijdens onze tour.

By the end of the summer in 2021, travel after the Corona pandemic was partly possible again. Although most of the world was not yet accessible to tourism, travel was possible again within the European Union and Schengen. So Ellen, Nancy and the undersigned planned a tour through Iceland to make a big tour through this beautiful country.

We also hoped to visit the volcano again. Unfortunately, the volcano was not active exactly when we were in the area. The 30 hour rhythm of pulsating activity had stopped and the volcano was silent for many days, it only became (very) active during the 6 days we were on the other side of the country.

Nevertheless, at the beginning of the trip we visited the volcano, the scenery was still impressive even though there was no activity. On the way to Landmannalaugur, however, we got stuck at a river that was too deep to cross and we had to divert to Selfoss.

The next day we were still able to reach Landmannalaugar (via a different route). After a long stay in the local natural hot spring, and a good night's sleep, we went for a walk through the area the next day. After visiting Ljotipollur Crater Lake we drove to Hveravellir, a long drive and also two hours longer because a herd of sheep blocked the road and we had to make a detour.

Now we crossed the highlands (here you can only drive with 4WD), but the route was impressively beautiful. In Hveravellir we also had access to a hot spring next to the hut. We also visited Kerlingarfjoll, a vast hot spring area with even brighter colors than Landmannalaugar. Due to the rain it had become a very muddy experience, but very impressive.

Before leaving the area, we explored the Hveravellir hot spring area behind our hut. A small but very nice area. After this we drove north and in about two hours we arrived at the ring road. We traveled to Dalvik via the North Fjords where we stayed in a small but very cozy cottage with a hot tub just behind it.

Before we drove on to Myvatn the next morning, we first visited the Fljot valley, a very beautiful glacier valley. After a nice Icelandic lunch, we drove to Myvatn via Akureyri and Godarfoss. There is so much to see in the Myvatn area that we had to make choices. We decided to visit Dettifoss (Europe's largest waterfall in terms of water volume), nearby Selfoss, Asbyrgi (a beautiful horse shoe-shaped valley with Icelandic birch trees) and the Krafla area that erupted for a decade in the 1970s and 1980s. All very beautiful areas with very different landscapes.

In the evening we met Corine who was also touring Iceland and had dinner together. In the late evening we went for some Aurora watching although we did see some Aurora, it was not that bright unfortunately.

The next day we visited Lake Myvatn with its explosion craters, the Hverir hot spring area and Studlagil before driving on to Borgafjordur-Eystri where we had a nice accommodation with hot tubs overlooking the sea.

The next day we visited Mjóifjörður and Dalatangalviti which is only accessible 4 months a year. It was a very nice ride, although we arrived late in Staffafel because of that. In the pouring rain we were welcomed by Helga, an acquaintance of ours who manages the guesthouse.

Unfortunately it was gray and rainy the next day. In the morning we made another trip to the Hvannagil gorge, which is just as coloured from the Rhyolites as Landmannalaugur. In the afternoon Helga took us to the Djúpavogskörin hot tub. This hot tub is not indicated and you should know that it is there, but it is wonderful to bathe in the middle of nowhere. After some time Corine also joined us.

The next day we left for the west, now we drove along the (more touristy) south coast. Unfortunately, the weather changed. We visited Jokulsarlon and Fjallsarlon (the latter already in pouring rain) and drove to Kirkjubæjarklaustur through a beautiful landscape for the overnight stay.

Just behind the property lies the Fjaðrárgljúfur gorge, a small but beautiful gorge. After visiting this gorge, we drove on to Holaskjol, with its beautiful waterfalls, and the Eldgija, which is the longest volcanic gorge in the world (about 70 km) and has a beautiful waterfall. Here we took a long walk and in the evening we arrived in Vik.

The next days the weather became really bad, it was clear that King Winter had arrived. It was raining and very windy. So we decided to change the program a bit and go to Hveragerdi first and to Vestmannaeyjar after that.

On the way to Hveragerdi, we first stopped at Reynisfjara, the well-known black coast near Vik, where we were almost blown into the sea. We then stopped at Solheimajokull, where we had a glimpse of the glacier in the pouring rain. We visited Skogafoss and Seljalandsfoss before arriving in Hveragerdi in the late afternoon.

From here we had to go to Þorlákshöfn because the ferry to Vestmannaeyjar to this harbor was rerouted due to the strong wind and high waves. Because the wind was blowing very hard that day, it was a rough crossing, afterwards we were told that we sailed in hurricane winds and it was a good thing we had taken pills against seasickness.

Fortunately, this meant that the weather during our full day at Vestamannaeyjar was much better. So that gave plenty of opportunity to explore the island and climb the Eldfell. We did this together with Ruth, a friend of Nancy. The day ended with a dinner with typical Icelandic dishes in the harbor. Fortunately, the return ferryride was way smoother, after arriving in Landyarhofn we drove to Geysir (famous for the Strokkur geyser that spews 40m high every 8 or so minutes). After a stop and walk in Þingvellir we drove to Reykjavik for the last two nights.

Because the volcano was not active it decided we went to explore the city, we visited the Halgrimskirkja and the Harpa (a beautiful theater building on the water) and the Fly Over Iceland show, an Imax show where due to the movement of the seat and a number of effects it really feels like actually flying over Iceland.

We returned to our accommodation through the old center. Since Corine was in the area again, we decided to have dinner together in another typical Icelandic restaurant, complete with Hakarl (fermented shark).

The next morning (early!) unfortunately this beautiful journey came to an end. The return flight went without any problems and by three o'clock everyone was safely home.

River in the highlands

Eyjafjallajokull from the Eldfell

The village in twilight 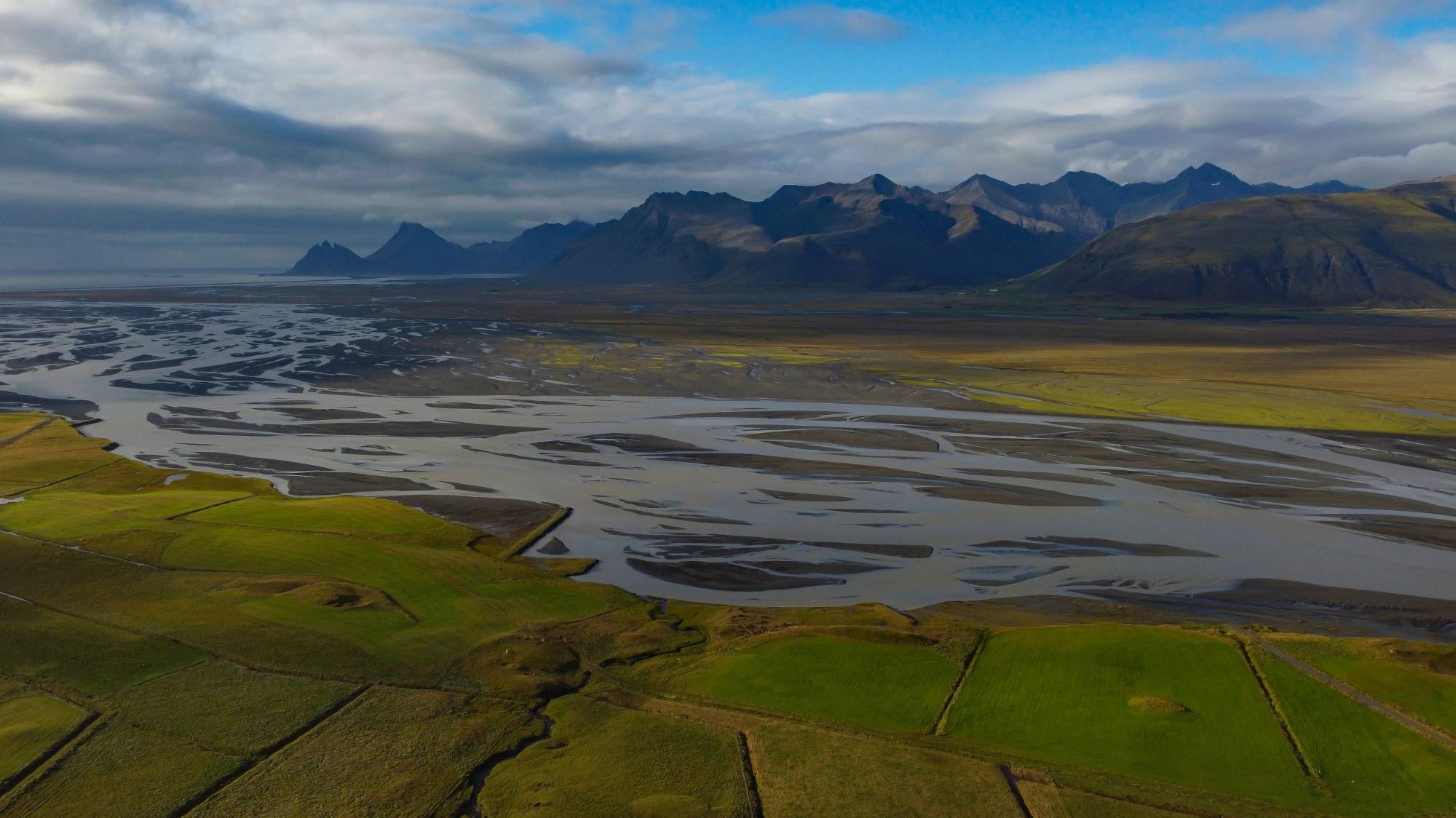